We had Thanksgiving with friends this year and the hostess made really great sweet potatoes. I’m not a huge sweet potato fan, and I especially detest yams.

Most sweet potato casseroles I’ve seen are covered with marshmallows and so overwhelmingly sweet I just can’t eat more than a bite or so.

The sweet potato casserole my friend made was not ridiculously sweet and was super delicious! I realized that, with a few quick changes, it could be Paleo and even more tasty, so you know I had to make my own version.

This Paleo sweet potato apple cranberry casserole with a nut streusel topping is a scrumptious, healthier alternative to the usual holiday casserole suspects! 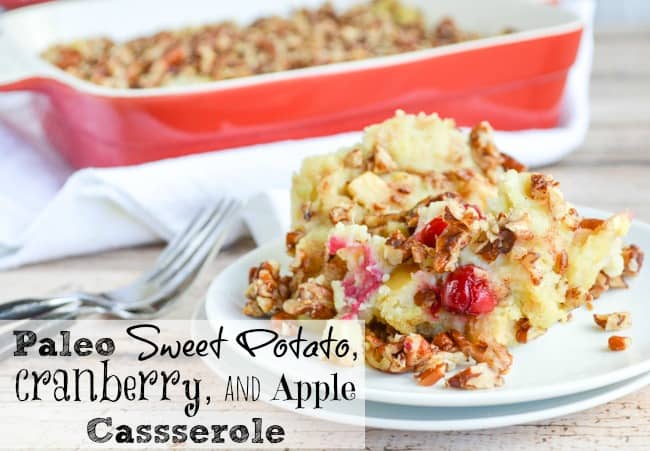 Don’t let a lack of white sweet potatoes stop you from making this – just use whatever is available where you live! The original recipe from my friend actually used canned sweet potatoes, so you could even use those, in a pinch. 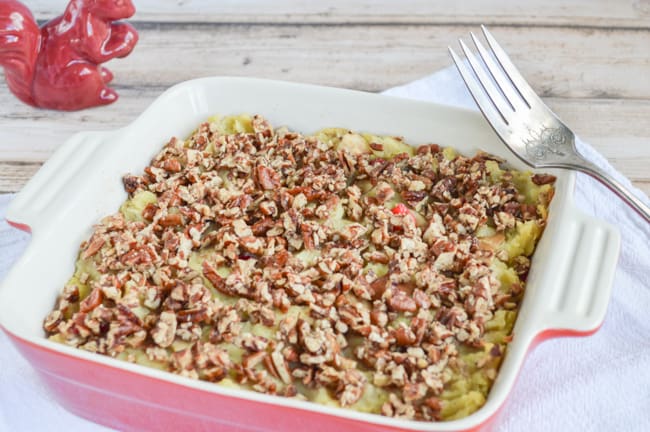 In addition to swapping canned sweet potatoes for freshly-cooked ones, I also substituted several other ingredients to make this Paleo-friendly.

The ‘original,’ had flour, oats, butter, cream cheese, and lots of brown sugar. It was definitely more of a “dessert” by my reckoning! I don’t feel bad about eating this casserole as a side or even a main dish, though!

Even though I added a little maple syrup to the topping, I didn’t put any added sweetener in the potatoes.

The cranberries add a definite tang, so if you’re worried about it being too tart, you can add a tablespoon or two of maple syrup to the potatoes, too. If you’re used to eating foods without gobs of added sugar, you really shouldn’t need to, though! I hope you enjoy this sweet potato apple cranberry casserole as much as we did!

For the streusel topping

If you’re like me, you may have difficulty keeping yourself from eating the pecan topping before it even makes its way to the casserole dish. It is so delicious! 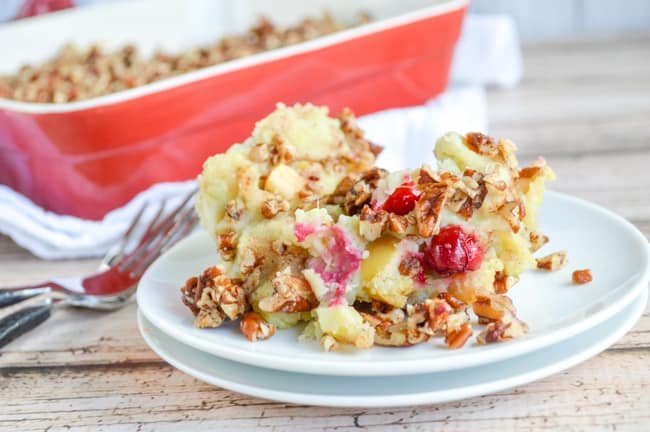 The tart cranberries pop in your mouth, the apples add both some texture and a bit of sweetness, and the pecans lend the whole dish a bit of crunch. It’s an amazing combination of flavors and textures that’s great hot or cold as leftovers.