Ultimately it took me a few weeks to really ‘get’ writing lesson plans, so I hope these five tips help you learn how to write effective lesson plans quickly and comfortably. 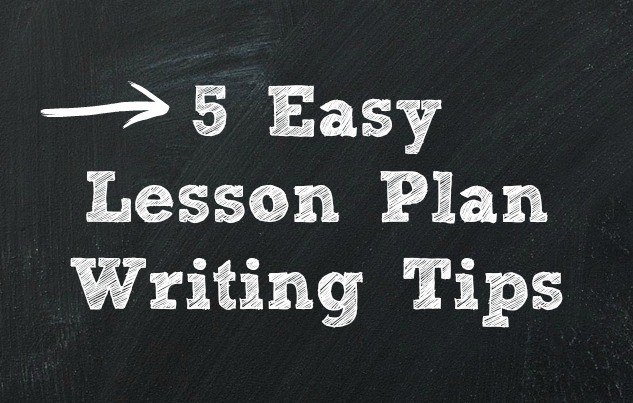 1. Use your school or program’s required format, if required. The information most lesson plan forms require is generally the same, but educator programs, districts, and schools usually have their own variation on the theme. If your degree program requires that you use a certain form or your district has mandated a specific focus in its lesson plans, follow the given lesson plan format. Because these forms are generally ‘one size fits all,’ talk to your cooperating teacher or a coworker to determine if all parts need to be present in each lesson. For example, the district in which I student taught had an EDI lesson plan form that asked for “independent practice.” As a social studies teacher, that wasn’t always practical. On the other hand, sections like “active closure” were supposed to be included in every lesson, regardless of content area.

2. Remember there is a difference between the standard and the indicator. The standard is the broad, overarching theme. The following example comes from the SC USH Guide to the Essentials:

Standard USHC-1: The student will demonstrate an understanding of the conflicts between regional and national interests in the development of democracy in the United States.

Well, dang, that’s a lot! If you just look at that standard and decide to tackle it whole, you’d be trying to teach over 400 years of US history because, in my opinion, regional differences are still affecting and changing democracy in the United States. That’s why you have to look at the indicators and use them for lesson planning purposes. The indicators chunk the objectives and make them somewhat more manageable:

USHC-1.1: Summarize the distinct characteristics of each colonial region in the settlement and development of British North America, including religious, social, political, and economic differences.

That’s still broad, but it’s narrowed down a bit. Now you know to talk about colonial British North America and to look at religious, social, political, and economic differences. That’s progress. In core subjects, you will probably have a guide to the essentials that lets you know what information students must cover and what is considered extra. For elective classes, you may need to determine what the main points are. We’ll talk more about writing lesson plans for an elective class later because it’s an entirely different situation in which you have more latitude.

What were the main regions in colonial british North America?

How was religious practice different between the colonial regions?

You can basically turn each point in the indicator into a question.

4. Use your questions to write the learning objectives. The learning objectives and essential questions are basically the same things, just phrased differently. Your program or district probably uses either Bloom’s Taxonomy or Depth of Knowledge (DoK). No matter which you’re expected to use, action verbs are preferred. For a few ideas, visit this explanation of the importance of Bloom’s Taxonomy and look near the bottom for examples. Selecting appropriate action verbs will be a post by itself, but for now remember that you should use verbs that require active participation by the student and that are demonstrable. Here’s an example to show you the difference between poorly written and well written learning objectives.

Poor – “The student will know the three main regions of colonial British North America.” How will you measure if the student ‘knows’ them?

Better – “The student will be able to (TSWBAT) list the three main regions of colonial British North America.” Now that the student is ‘listing,’ s/he is actively involved and the knowledge is demonstrable.

Even better – “TSWBAT demonstrate a knowledge of the three main regions of colonial British North America by outlining and labeling each on a map.” This example is even better than the preceding one because it engages the student on a higher level. Instead of simply recalling the names and writing them on a piece of paper, s/he must show actual knowledge of the region’s locations as well as remember the names.

5. Remember that you do not have to cover every single point in the indicator in a single lesson. Some of the indicators are very broad and cover a great deal of material. If it’s too much for one lesson, it’s too much for one lesson. I learned the hands-on way (doesn’t that sound nicer than ‘the hard way?’) that cramming too much into a lesson results in spending just as much time in explanation, working out confusion, and reteaching as just teaching it more slowly to begin with. Here’s a fantastic example of a  too-big standard:

USHC-2.2: Explain how the Monroe Doctrine and the Concept of Manifest Destiny affected the United States’ relationship with foreign powers, including the role of the United States in the Texan Revolution and Mexican War.

That’s 25 years of American history, two of the country’s most defining ideas, and two wars! Clearly that indicator is too large for one lesson, and that’s okay. Assuming that because it was in one indicator meant it had to be in one lesson plan was one of my biggest mistakes early on. It lead me to create monster lesson plans that lacked detail and focus, and that left the students in need of reteaching. Don’t be afraid to break the indicator into smaller chunks that allow you to create manageable lesson plans with realistic lesson. 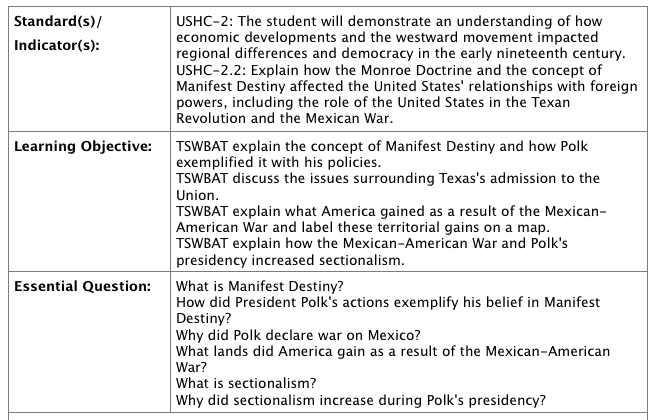 Writing lesson plans becomes easier with time, but it’s a pretty daunting task at first. Whether you’re completing an assignment for class, beginning your professional internship, or writing lesson plans for a new course, I hope these five tips help you and that you check back for more student teaching tips in the future!

If you’re just about to begin your student teaching, I recommend you look at my 5 tips for surviving the first days of school. They’ll help you make a good impression and assist with the transition into your internship. 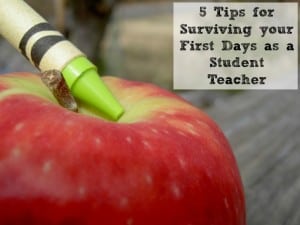