In early January I sat at my grandmother’s table, on the verge of tears. I didn’t realize it at the time, but I’d just seem my dad for the next to last time and we were discussing how to spend the rest of our New Year’s trip to Florida. My grandmother wanted to spend time with us, I wanted to see her, and Papi Chulo wanted to go to Universal Studios. I can’t blame him – he knew this trip would be his last real free time until some point this fall. Two of the people I care about most wanted conflicting things from me; no matter what I chose, I would let someone down. Seeing me so upset, Papi Chulo said “Disappoint the person who will forgive you.”  We didn’t go to Universal.
When we decided I would visit Singapore to see Papi Chulo on a port call, he immediately started asking if we could go to Universal Studios Singapore. I agreed as soon as I realized they have a Battlestar Galactica ride (yes, I’m a nerd), and incorporating a trip to Universal into our Singapore stay became a top priority for us. I was incredibly excited because I knew he’d been wanting to visit Universal all year long and I’d never been to a Universal Studios location. It would be a mistake to say the day was a monumental waste of time and money because that isn’t quite true. It was probably the most miserable vacation day we’ve ever spent together but, oddly enough, we agreed to decide the day wasn’t a waste. We learned some pretty valuable lessons that will, I’m sure, serve us well in the future. 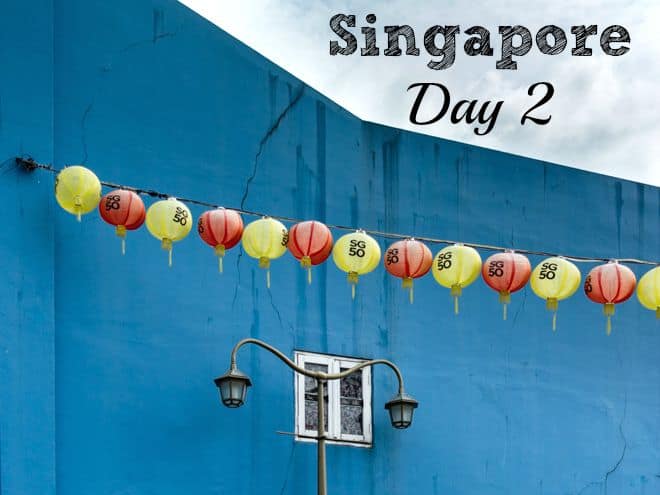 Honestly, the morning went pretty well until we actually got in line to buy tickets. The park is located at a Disney resort and the resort area had all these large Brito pieces. Papi Chulo loves Brito’s work because the artist has lived in Miami for many years. It was a nostalgic taste of home with a Singapore twist – there was even a Brito Merlion! Very cool.

We stood in line for what I felt was an unacceptably long time just to buy tickets. When we got to the window, entry was more expensive than we’d expected (based on looking online the night before), I guess because they included a summer special meal voucher thing. I dunno. But we were there and determined to go in.

We spent about 40 minutes in line for an indoor roller coaster-type ride, and that was fine because of the air-conditioning. We rushed back to our locker in time to retrieve our belongings for free and it seemed like a pretty good start for the day. 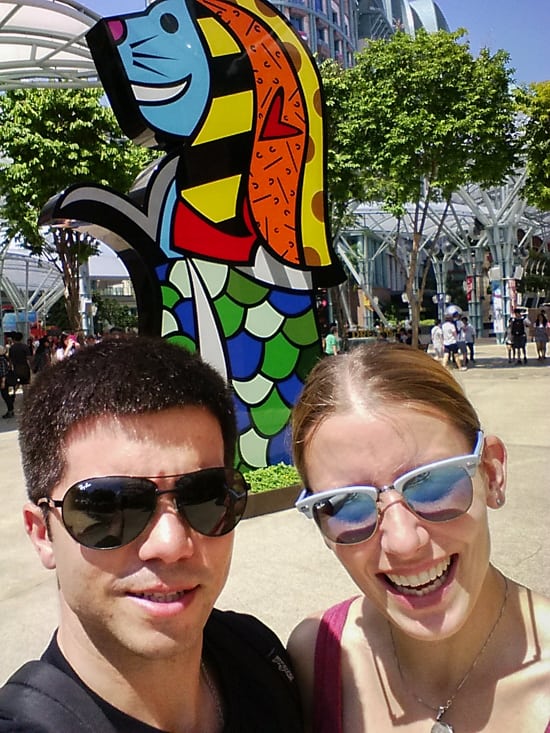 Unfortunately, our next ride came approximately 7 hours later. I wish I were making that up. Before we could get in another line, they closed most of the rides for weather reasons. I understand the desire and need to keep customers safe, but they kept claiming there was lightening when all we could see was blue skies. We walked around the park. Then we waited. And waited. I decided to camp out front of the Galactica roller coaster and figured we could hop on as soon as it reopened. It drizzled a little bit and we waited more. We stared at the pond in the middle of the park and waited. We sat outside the BSG ride again and waited.

When the rides had been closed for about two hours, we decided to go wander around outside the park for a while. That was the first time during the day I kind of lost it. We’d been at the park for over three hours, but had only managed to get on one ride. It was hot, humid, and I was still dehydrated from my 30 hour trek around the world to get there. I was hungry and upset that virtually all the rides were closed for what, as far as I could tell, was nonexistent lightening. I sat down on a fountain in the middle of the Sentosa Singapore Disney Resort and cried.

I didn’t cry because I was being a brat about the rides; I cried because I was completely overwhelmed by everything. As regular blog readers know, I lost my dad just three weeks prior to my Singapore trip. That’s the real reason I cried, not closed amusement park rides, but the day’s events were the proverbial “straw that broke the camel’s back.” Poor Papi Chulo – what an awkward experience for him! He never likes seeing me cry and I can’t imagine watching me have a melt down on a fountain was any fun. He eventually cheered me up a bit by taking goofy selfies (or, technically, “wefies”) with me while I was moping. (One of these is bottom right in the photo collage he made and sent me shown below). We decided to go back to camping out the Galactica coaster. (Yes, I am obsessed with Battlestar Galactica and, a few years ago, would play a BSG board game almost every week with friends. And we maybe sort of dressed up a bit like the characters in the game…) 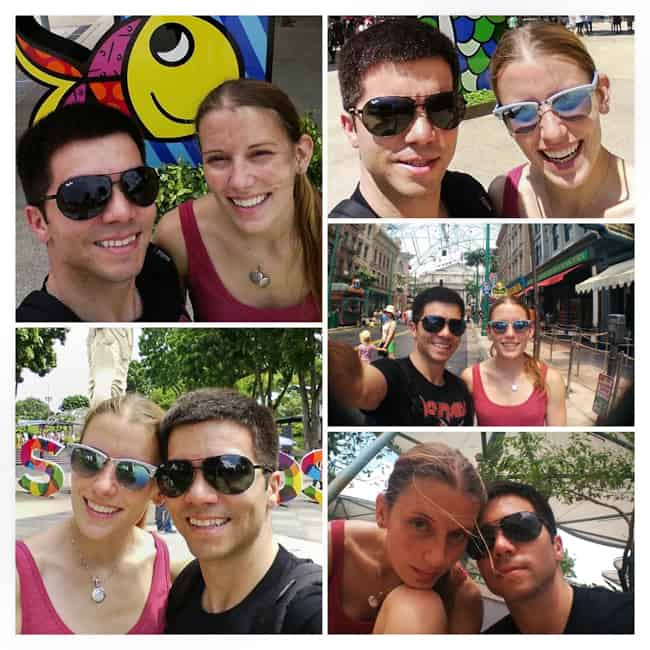 The rides did eventually reopen, so we got in line for the human side (of course!) of the Galactica dueling rollercoasters. The sign said a 45 minute wait. Sweet! Well, after 45 minutes x 2 in line we were standing on the final flight of stairs before the ride. We could almost see where people were getting on. Then something (we have absolutely no idea what) happened to close the ride “temporarily.” About half an hour later we moved a few feet up the stairs and the ride closed again. The entire line, including the indoor stairs were were standing on, were un-air-conditioned, and the guy ahead of us may have eaten a lunch that didn’t agree with him. I’m not blaming him for his frequent flatulence – I can easily imagine a theme park lunch giving someone an uncomfortable amount of gas – but this fact didn’t make our wait any more pleasant.

At some point close to 6 pm, we finally got on the Galactica rollercoaster.

We rushed to use our meal vouchers before the park closed at 7 before heading out of the park to catch a taxi back to the hotel. We were at Universal almost the entire time they were open that day and managed to get on two rides. Not exactly good value for our money!

To catch a taxi, we stood in a new line for an additional half an hour.  A lack of taxis wasn’t the problem – there were dozens and dozens of people in line ahead of us. During the ride, we decided to get dropped off by a Quicksilver store for a bathing suit so we could enjoy the hotel’s pool after our long, dehydrating day. When the taxi dropped us off and we discovered Google maps had lead us to a permanently closed Quicksilver location, I lost it for the second time that day. Right there in the middle of the sidewalk in the center of Singapore. It made the afternoon’s fountain cry session seem downright private! Wonderful man that he is, Papi Chulo stood there and hugged me, reminding me that I didn’t know any of these people walking past and should just take the time I needed.

I’m glad no one called the cops on us. Singapore has a law against non-consensual hugging, and I can see how someone might interpret him hugging me and me crying as a potentially lawless situation.

So what on Earth sort of valuable lesson did we take away from this experience? That there are much better ways to spend your time and money than at amusement parks! In fact, we officially declared it a miserable, but decidedly not wasted, day because we went ahead and learned something important just a year into our married life together. And lucky us – we hadn’t even skipped out on my grandmother to discover this piece of information! Next time we visit her, whether or not to head to Disney will be a total non-issue. It sounds silly, but my insistence on not going to Universal Orlando was probably the biggest disagreement Papi Chulo and I have ever had, so both of us deciding we just don’t want to head to a theme park again anytime soon is a very good thing for us.

Oh, in case you’re wondering, we found a different Quicksilver, I ended up with a new bathing suit, and we ended up at our hotel’s beautiful infinity pool.

Our cell phones were stashed in a locker while we waited in line for the two rollercoasters of the day, so Papi Chulo and I got spend hours talking without any technological distractions. In the middle of a crowded, sweaty line surrounded by non-Westerners, we had our own little island and I was finally able to being giving voice to my emotions. In the end, not a wasted day at all. 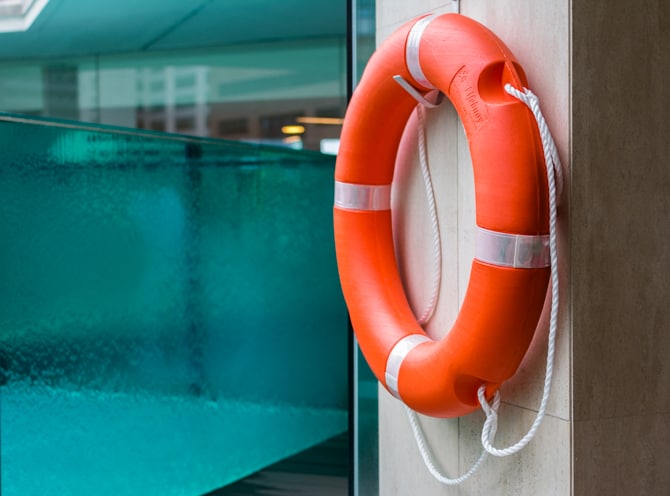